A long train ride with locals

The worst moment to have inspiration is when you don’t have a piece of paper, a pen, neither good memory. Me and Nina are on an Indian night train from Jaisalmer to Delhi. The ride will take 17 hours… The train was full and the only class available was the lowest.
Finally a moment of silence to think in between the million sounds of people and the horn of the train.
This class doesn’t provide air conditioning neither glass for the windows. Some people are sitting on the stairs of the coach. The doors are opened. The smell that comes from the toilet is strong and it is mixed with the dust that comes in.
Nina lays on my legs and at the end of her feet a man is sitting to give her enough space. On the seat in front of us a man is wearing a typical white Indian dress and two guys are sleeping strangled into each other. Between our seats, two boys are laying on the floor. An older couple occupied the bagage racks that were situated above our heads.

Till thirty minutes ago the locals were making a lot of noise. For six hours we were entertained by their curiosity for us. At some point I could count 14 smiling locals staring at us. They tried so many times to speak in Hindi and fortunately one of them could speak a little bit of English. Three of them are going to join the Indian army and started to challenge each other to do crunches. Of course I had to show my skills to them as well and I was doing crunches in the middle of the night on an Indian train…

We tried to get some sleep which was sort of impossible and the next morning we had to do a photo session with all of them. Slowly we were entering Delhi, watching the slums and people pooing next to the train tracks. There is garbage everywhere as people just throw their trash out of the train. I can’t describe the feeling in that moment. Sadness probably. Finally we arrived, ready to go to bed again.. 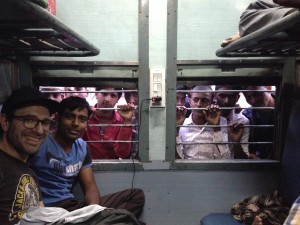